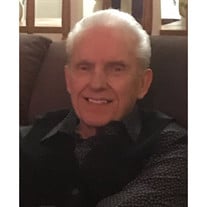 William C. Bovee Gates - Entered into his heavenly home after a long battle with cancer on Thursday, April 1, 2021 at age 78. Predeceased by his parents, Charles and Wilma; and brother Charles. Survived by his wife, Karen; children, Wendy Bovee, Yvonne Bovee, Amanda (Sam)Duritza, Alyssa (Roberto) Stolfa and John Tarricone; grandchildren, William, Sara, Nicholas, Joelle, Earl, Brigette, Finley and Elia; great-grandchildren, Joey, Liam and Jayden; sister, Charlene (Keith) Lewis; several nieces, nephews and dear friends. In 1942, William "Bill" Charles Bovee was born in the New York Southern Tier. Raised in Addison, he became a New York State Trooper, before further pursuing his love for protective services. Moving his family to the Rochester area in the 1970s, he worked as a sergeant of security at the University of Rochester. As he grew in the field, he began writing and developing security systems, as Director of Security, for St. John's Nursing Home. During these years, he pursued his degree and earned his Bachelor of Science in business from SUNY Empire State University and held an adjunct professorship at Monroe Community College. In the 1980s, after getting his degree, Bill then became Corporate Director of Security for Bausch and Lomb and traveled worldwide leading Ray Ban counterfeit investigations. His next move was President for Doyle Security, heading up a security division while joining the New York Guard, before retiring from the security field. Although Bill loved security, his true passion was for the church and in-depth Biblical studies. While serving as Pastoral Counselor for New Testament Christian Church, in Greece, NY for several years, he proudly earned his Doctorate of Divinity from Andersonville Theological Seminary in 2019. His vast interests, talents and passions energized, inspired and excited everyone around him. A devoted husband, father, grandfather and great grandfather he will be greatly loved and missed by his family, until we meet again. Friends may call at the Leo M. Bean and Sons Funeral Home Thursday 4-7PM. A celebration of Bill's life will be held at New Testament Christian Church, 349 North Ave. Rochester, NY 14626 on Friday 11AM. In lieu of flowers, memorials may be made to Lipson Cancer Center or Hildebrandt Hospice.

William C. Bovee Gates - Entered into his heavenly home after a long battle with cancer on Thursday, April 1, 2021 at age 78. Predeceased by his parents, Charles and Wilma; and brother Charles. Survived by his wife, Karen; children, Wendy... View Obituary & Service Information

The family of William C. Bovee created this Life Tributes page to make it easy to share your memories.


Gates - Entered into his heavenly home after...

Send flowers to the Bovee family.