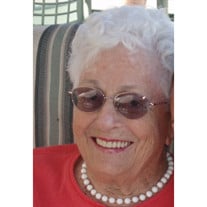 Shirley E. Wimer passed peacefully on January 3, 2020 at age 96. Her spunk and wisdom will be greatly missed by her family. She is survived by her three children - Thomas E. Wimer, Janet (Michael) Morrissey and Douglas (Ridwan) Wimer; four grandchildren, Christopher (Kate) and Kyle (Katie) Morrissey, Marissa and Katherine Wimer; four great grandchildren; and several nieces and nephews. She was predeceased by her husband of 63 years, Edward A. Wimer in 2010; her parents, Glenn E. and Marion G. (Rood) Nichols.; her brothers, Donald (Elsie) and Robert (Jean) Nichols; and sister in law, Helen (Bob) Dispenza. Shirley was born on June 20, 1923 and grew up on Driving Park A. with her 2 older brothers. Her family eventually moved to Spencerport where she many lifetime friends and graduated from Spencerport High School. The family also had a cottage of the shore of Lake Ontario, where she spent her summers catching perch and selling candy bars up and down the beach. After high school, Shirley attended Brockport College where she met Edward. Their relationship was interrupted by WWII when Ed served for 4 years in the China Burma Theatre. While he was gone, Shirley graduated and started her teaching career in Albion, NY and then Spencerport. Ed returned and they married at Colgate Rochester Divinity School Chapel. The two of them moved to Leonardsville, NY where Ed got his first job teaching. Shirley also continued to teach until they started their family in 1950. Shirley wanted to return to Rochester to be near family and was overjoyed when Ed was hired to teach physical education at Gates-Chili's Washington Irving Elementary School. The bought a home in Chili where they raised their family and lived for over 40 years. Shirley eventually returned to teaching and retired in 1981 from the Rush Henrietta School District. She and Ed became active members of the RTO, the Retired Teaching Organization, in Rochester where they participated in bowling, hiking, lunches and many other activities. They made wonderful friends in this organization. While retired, they became grandparents and truly enjoyed their new roll. They visited, played and attended many sporting events of all 4 grandchildren. Shirley also enjoyed preparing and hosting large family meals, complete with desserts. She loved her sweets. Shirley was blessed with 4 great-grandchildren- her first one arriving when she was 92! She called them her "babies". Shirley and Ed were active members of Gates Presbyterian Church. She often helped with ham dinners and craft fairs. She was a member of the Rebecca Circle. Shirley loved music and often knew a song to sing for every occasion. She loved playing her record albums on her cabinet stereo. She especially liked Lawrence Welk, Jim Nabors, and Mitch Miller. Ed and Shirley were a true team when it came to adventures. They purchased a travel trailer in the 1960's and took a 7 week long family trip across the US. Shirley was the chief navigator. They also camped in Myrtle beach, Jekyll Island and Sanibel Island, which became a favorite destination well into their retirement. Shirley enjoyed Sanibel's famous shelling beached and had beautiful seashells displayed in their home. Additionally, they traveled to Alaska, Hawaii, Europe, and to many US and Canadian destinations. Throughout her life, Shirley spent countless hours on the shores of Lake Ontario. In the 70's Ed built a small cottage next to the Nichols cottage where her children, grandchildren and great-grandchildren continue to enjoy beach life. Shirley always served as supervisor of the activities. And...she water skied, fished and had campfires with s'mores. She still came to sit on the deck when she was 96! Shirley also drove her car into her 90's. Her favorite destination was the North Chili Family Restaurant about a mile up the road from her house. The staff there embraced her and welcomed her each time she walked in. A "Thank You" to all of them. Shirley and Ed had moved to a one level home in North Chili in 1997 where Shirley was able to stay until she was hospitalized about a month before her passing. A huge thank you to the staff and workers of Home Instead who made her last year and a half possible at home. Talking of Shirley would not be complete without mentioning her love of sweets- especially chocolate. She and her brother Bob would make fudge whenever they had enough ingredients. And they would go tot the corner store to buy penny candy. She was quite the entrepreneur pedaling her bike to sell candy bars to her beach neighbors. At their home in Chili, she had an entire kitchen cupboard called the "Candy Cupboard". Three shelves filled with every kind of candy imaginable. And she was well known for her homemade Christmas candy which she gave out to neighbors as gifts. Her chocolate caramels were the best. When she was hospitalized in December and was told she couldn't swallow well enough to eat solid food she said, "I can swallow! Give me a chocolate bar and watch it go down!" That was Shirley. Friends may call at the Leo M. Bean and Sons Funeral Home, 2771 Chili Ave. on Saturday, January 18, 2020 from 11:00-1:00 followed by a short service at 1:00PM. In lieu of flowers please donate to your favorite charity or Lollypop Farm. Or smile the next time you eat a candy bar.

Shirley E. Wimer passed peacefully on January 3, 2020 at age 96. Her spunk and wisdom will be greatly missed by her family. She is survived by her three children - Thomas E. Wimer, Janet (Michael) Morrissey and Douglas (Ridwan) Wimer; four... View Obituary & Service Information

The family of Shirley Wimer (Nichols) created this Life Tributes page to make it easy to share your memories.

Send flowers to the (Nichols) family.