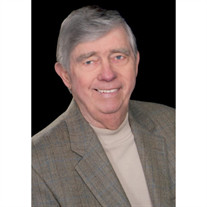 Richard M. Yackel N. Chili - Richard Martin Yackel entered his heavenly home on Wednesday, October 21 with his family at his side. Born in St.Paul, Minnesota on September 30, 1936 to Martin and Mabel Yackel, he attended school into his sophomore year after which he moved to Lamberton, Minnesota. Upon his graduation in 1954, he entered the United States Air Force where he served for four years. He graduated in 1964 from the University of Minnesota with a degree in electrical engineering, joining the research and engineering department at Eastman Kodak in Rochester, New York. He retired in 1991. Rich was an enthusiastic sports fan. He played club hockey with his sons into his fifties! He served as a coach and a member of the board of directors of the Rochester Youth Hockey League and the Chili Soccer Association. He was an avid RIT Tigers hockey fan. A former member of Brook-Lea Country Club, he also served on the operations committee preparing for the LPGA yearly tournament held at Locust Hill Country Club. He enjoyed playing bridge and euchre with friends and was an active member of Lutheran Church of Our Saviour. Proud to be a United States veteran, he was honored to participate in the 2019 Rochester Honor Flight, Mission 65. He was preceded in death by his parents, and three brothers, Roger, Kenneth and Norman Yackel. He leaves behind his wife of 60 years Sharon; his children Karen Yackel Cetinkaya, Richard (Deb) Yackel, James Yackel, and Kevin (Susan) Yackel; six grandchildren, Deniz Cetinkaya, Richard (Megan) Yackel, Benjamin Yackel, Lyndsey Yackel, Emily Yackel and Ashley Yackel; his sister Carol (Tom) Duffy; his sisters-in-law Helen, Gerry and Donna Yackel; his brother-in-law, Don Anderson; and a multitude of nieces and nephews. The family would like to thank Dr. Megan Lyons and UR Home Care Services for their excellent care. Interment will take place at Westside Cemetery at the convenience of the family. Family and friends are invited to Richard's Memorial Service Saturday, October 9, 2021 at 1:00pm at the Lutheran Church of Our Savior, 2415 Chili Ave. Rochester, NY 14624. In lieu of flowers, donations may be made to Lutheran Church of Our Savior, 2415 Chili Avenue, Rochester 14624 or Rochester Honor Flight, P.O. Box 23581, Rochester NY 14692.

Richard M. Yackel N. Chili - Richard Martin Yackel entered his heavenly home on Wednesday, October 21 with his family at his side. Born in St.Paul, Minnesota on September 30, 1936 to Martin and Mabel Yackel, he attended school into his sophomore... View Obituary & Service Information

The family of Richard M. Yackel created this Life Tributes page to make it easy to share your memories.

Send flowers to the Yackel family.