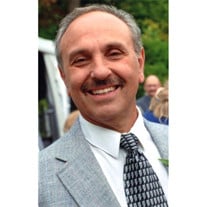 Richard M. Sciascia Irondequoit - Wednesday, April 7, 2021 at age 71. Predeceased by his parents, Samuel and Grace; and brother, Carl. Survived by his wife, Shawn; children, Richard, Sammy and Sara; step-children, Emily Austin, David (Sarah) Austin and Josh Austin (Angela Pecora grandchildren, Nicholas and Michael Scranton, Madison, Noah, Mason and Grayson; great-grandchild, Gracie Belle Vega; siblings, Samuel (Angie) and Frances (Antonio) Masci; sisters-in-law, Susan Leslie, Sharon (Joe) Arena and Sherri (Jim) Osborn; brother-in-law, Stephen (Kim) Leslie; several nieces, nephews and dear friends. Friends may call at the Leo M. Bean and Sons Funeral Home Tuesday 3-7PM. Funeral Mass Wednesday 10AM at St. Pius Tenth Church, 3000 Chili Ave. Rochester, NY 14624. Interment, Holy Sepulchre Cemetery. In lieu of flowers, memorials may be made to Villa of Hope, 1099 Jay St. Building J, Rochester, NY 14611. RIchard was born on 7-29-1949 and was tragically taken from us on 4-7-2021. Rich graduated from Gates-Chili High School and shortly after started his career, following in his father's footsteps, delivering bread for Millbrook Bakery and later moved on to Wonderbread, where he worked for over 30 years. He then worked for a private company until the day he died. The news reported he was an ELDERLY 71 year old man. The TRUTH is he could have ran circles around a 17 year old kid. (He was jumping on a trampoline last summer with his great-granddaughter, Gracie, who was named after his mother, Grace.) When he wasn't spending time with his wife, children, grandchildren and the light of his life, great-granddaughter, Gracie, he was playing cards with his friends. Rich would light up a room when he walked in whether it was his family or friend's house or his daily stops he made for work. He would give you the shirt off his back and even the Ho-Ho's and Twinkies off his work truck. Story has it he retired. We seem to think he got caught. How do you sum up a lifetime of memories and accomplishments in a few short paragraphs? Rich was full of life and energy. Richard Mathew Sciascia was an AMAZING MAN!!

The family of Richard M. Sciascia created this Life Tributes page to make it easy to share your memories.

Send flowers to the Sciascia family.