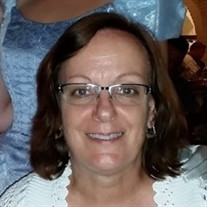 On Saturday, June 22 2019, Patricia O'Connor Anderson, loving wife and mother, passed away at age 59 after battling cancer. She is survived by her husband, Paul, two children Niel and Emma, sisters Janet (Robert) Schomske, Marguerite (Bill) Mckee, brothers Michael (Mary) O'Connor, and Joe O'Connor, sister-in-law Susan Anderson (David Ortman), brothers-in-law Todd (Mary Jo) Anderson and Peter Anderson. Patty was born on September 27 1959 in Rochester, NY to Therese and Robert O'Connor. On October 6 1984 she married Paul Anderson. She graduated from SUNY Brockport with a degree in Marketing. Patty and Paul raised two children, Niel and Emma. Over the years, they also had a rabbit, Zipper, and three dogs, Beau, Belle, and Rhett. She loved to garden, planning her arrangements meticulously and admiring their beauty. Lilacs were her favorite. She cooked with passion and eagerly shared her creations with friends and family. Her children will keep her tradition of culinary creativity alive though the recipes she has passed down. She was an athlete from a young age, and enjoyed both playing and spectating a number of sports. In the winter, she could often be seen skiing down the mountain in Bristol with her good friends and family. She was a lifelong Minnesota Vikings fan and was fortunate enough to visit their new stadium with her son several years ago. Her love of the team is preserved in the brick bearing her name that adorns the ship outside the stadium. Most of all, Patty was the kind of person who yearned to put a smile on the face of everyone she met. She was always thinking of ways to surprise her friends and family with unexpected, heartfelt gifts, both large and small. Her capacity to love and connect with everyone she met was unmatched, and if she knew you, you can be sure that she was thinking of you. Friends may call at the Leo M. Bean and Sons Funeral Home Saturday, Aug. 10th from 9am-12pm with a brief service at 9:30am during the calling at the funeral home, If you wish to give, the family asks that any donations be sent to her late cousin Tim Wesley's charity, Be UninTIMidated. Contact information can be found at beunintimidated.org.

The family of Patricia O. Anderson created this Life Tributes page to make it easy to share your memories.

Send flowers to the Anderson family.