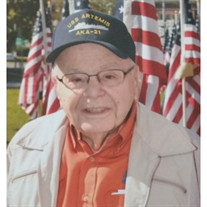 Louis A. Zollo Greece - Died peacefully on September 6, 2018 at the age of 93. He is predeceased by his parents, Adelina and Antonio Zollo; brothers, Samuel and Carl Zollo; and by his sister-in-law, Catherine Zollo. He is survived by his brothers, Raymond and Anthony Zollo; and by several nieces and nephews, Michael Zollo and Jean (Larry) Pearston, Dr. Raymond Zollo, Sandy (Grant) Perry and Scott (Tracy) Zollo. He is also survived by several great-nieces and great-nephews, Lauren and Shaun Pearston, Mason and Lexi Perry, Carli, Abby and Zach Zollo and will be deeply missed but joyfully remembered by many friends and relatives in the Rochester area including his neighbors in The Village at Unity. Lou was a graduate of Edison Tech High School in 1944 and immediately upon graduation entered the US Navy and participated in the Invasions of the Marshall Islands, Saipan, Iwo Jima and Okinawa during WWII. When peace was declared he was involved with the Occupation of China and the return of prisoners of war. Upon the completion of his military service and his return to the Rochester area, he attended RIT and graduated with an Industrial Engineering degree. He worked at Rochester Products, a division of the General Motors Corporation, until his retirement. He was an active participant with the Honor Flight Rochester Organization after flying to Washington, DC on Mission 24 in September of 2012. Friends may call at the Leo M. Bean and Sons Funeral Home, Wednesday 4-7 PM. His Funeral Mass will be Thursday 11 AM at Holy Ghost Church, 220 Coldwater Road. Interment, Holy Ghost Cemetery immediately following the Mass. In lieu of flowers, the family request donations in Lou's memory be made to Honor Flight Rochester Organization at the following address, Honor Flight Rochester, Inc., PO Box 23581, Rochester, NY 14692.

Louis A. Zollo Greece - Died peacefully on September 6, 2018 at the age of 93. He is predeceased by his parents, Adelina and Antonio Zollo; brothers, Samuel and Carl Zollo; and by his sister-in-law, Catherine Zollo. He is survived by his brothers,... View Obituary & Service Information

The family of Louis A. Zollo created this Life Tributes page to make it easy to share your memories.

Send flowers to the Zollo family.