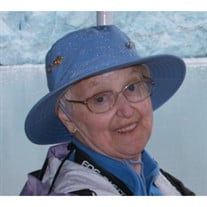 Lois B. (Eleanor) Smith Chili - Passed away on October 30, 2019 after a long battle with illness. Lois was born in Boston, Massachusetts on June 18, 1937. After high school Lois attended nurses training at Mary Hitchcock Memorial Hospital in Hanover, New Hampshire, and graduated as a Registered Nurse. During her nurses training, she met her future husband Douglas Smith. Following her training they were married and moved to Madison, Wisconsin so her husband could continue his work toward his Ph.D. During their time in Madison she bore two sons, David and Bruce. Following his completion of studies, they moved to Albuquerque, New Mexico where her daughter Barbara was born. The relocated to Webster, NY when her husband went to work for Kodak. While living and raising her children in Webster, Lois founded the Webster Montessori School. She was also deeply involved with the Webster Baptist Church, which included a period when she was the church Moderator. Lois's major accomplishment was to see to the development of her children who all became doctors. Following a separation with her husband in 1998 she moved to Chili, NY. She has been active at the Passerine Bird Banding station at Braddock Bay, the Genesee Land trust annual garden tour, and WXXI Public Broadcasting as a volunteer. Lois is also an ADK 46er, having climbed all 46 of the Adirondack Peaks over 4000 feet. She loved canoeing and white-water kayaking, and all things natural. She traveled widely to Africa, India, and Australia and had a deep passion for elephants. Lois designed and helped build a natural wildlife pond in her back yard which is certified by the National Wildlife Association. Lois is survived by her three children, David, Bruce and Barbara, their spouses, Jeni, Tami, and Lynn and three granddaughters, Sarah, Brianna, and Emma; her brothers, Karl and Mark Becker and numerous nieces and nephews. A celebration of her life is being planned for November 15, 2019 at 11:30AM at the Lodge #1 at Braddock Bay Park in Greece, New York. In lieu of flowers, please make donations to Lollypop Farm or the Braddock Bay Bird Observatory in her name.

Lois B. (Eleanor) Smith Chili - Passed away on October 30, 2019 after a long battle with illness. Lois was born in Boston, Massachusetts on June 18, 1937. After high school Lois attended nurses training at Mary Hitchcock Memorial Hospital in... View Obituary & Service Information

The family of Lois (Eleanor) Becker-Smith created this Life Tributes page to make it easy to share your memories.

Send flowers to the Becker-Smith family.