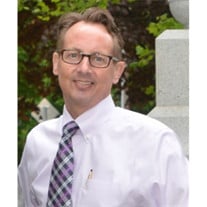 John Charles Marcus Voss passed away May 14th at the age of 52 after bravely battling throat cancer for the past several months. He was born May 16, 1967 in Scottsville, New York, the second of four children. He is survived by his parents, Robert and Georgia Voss; sisters Laura Voss, Katie (Jonathan) Voss Ghent, and Polly (James) Voss McElwee; children Adam, Luke, and Bridgett Voss; several aunts, uncles, nieces, nephews, other relatives, church family, and a host of friends. John was a 1985 graduate of Hilton High School. After graduation, he served for two years as a missionary in the Ventura County, California (Simi Valley) Mission for the Church of Jesus Christ of Latter-day Saints. John earned a full academic scholarship to Brigham Young University where he received a bachelor's degree in Microbiology and was recognized as a Presidential Scholar. He was also a distinguished member of Mensa International, The High IQ Society which recognizes people whose IQ is in the top 2% of the global population. John enjoyed tremendous career success as an award-winning sales rep in the Microbiology and Medical Lab industries. He was a registered Microbiology Technologist, certified by the American Society of Clinical Pathologists. As a top regional and national sales performer, he earned a reputation as a go getter with a tireless work ethic, a lightning fast learner, and an extremely personable gentleman. By all accounts, he was a class act and the consummate professional. John was an adventure seeker, a marathon runner, motocross competitor, street bike rider, bicycling enthusiast, skateboarder, skier, golfer, and in recent years began honing his skills as a stand-up comedian. Before becoming ill, he planned to move from Phoenix (where he lived for the past 20 years) to Los Angeles to launch his acting career. Above all, John was known as a man of integrity, honesty and sound character. He was committed to his family and his faith. And he was generous with his time. A simple, "Hi, how are you," followed by, "Fine and you?" was rarely enough for John. He wanted to get to know a little about every person he met. He would take the time to ask, "How is your family?" or "Where are you from?" For John Voss, there was no such thing as a stranger. Through years of practicing simple acts of love and kindness, John was a friend to just about everyone that crossed his path. John spent his final weeks at home under the care of his family and a team of hospice professionals. He was surrounded by love, music, laughter and all of the comforts of home until his last breath. John Voss lived by three simple words, right to the very end: "No bad days." His positive attitude and outlook on life, even in the face of extremely difficult circumstances, were an inspiration to us all. We will forever be grateful for the indelible mark that John Voss made on our lives and in our hearts. May God bless him with eternal health, joy, endless LDR Char Pit burgers and the loudest, meanest Harley Davidson that heaven has ever seen. He was the most amazing human being many of us have ever known. Private service and interment will be Saturday, May 23rd at 12:00 p.m. at Grove Place Cemetery, 2775 Chili Avenue, Rochester, NY 14624. In lieu of flowers, donations may be made to the Crohn's & Colitis Foundation. Funeral arrangements by Leo M. Bean and Sons.

John Charles Marcus Voss passed away May 14th at the age of 52 after bravely battling throat cancer for the past several months. He was born May 16, 1967 in Scottsville, New York, the second of four children. He is survived by his parents,... View Obituary & Service Information

The family of John Marcus Voss created this Life Tributes page to make it easy to share your memories.

John Charles Marcus Voss passed away May 14th at the age of 52...

Send flowers to the Voss family.