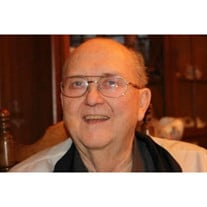 John Edward Nieboer, of Rochester New York, passed away on Thursday, July 4, 2019 at the age of 81. John was born in Grand Rapids, MI on April 18, 1938, which was his early childhood home. He was the eldest son of Joseph and Evelyn Nieboer's 10 children and is survived by his brothers/sisters Miriam J. Sneadker, Rebecca Clode, Lois Brooks, Joseph Nieboer and Ruth Nieboer; many nieces, nephews and cousins. He is preceded in death by his parents, his sister Joanne Quillman; and his brothers, David, James and Daniel (Dan) Nieboer. John met and married his wife of 23 years, Alice Russell, and raised their family in Arlington Heights Illinois. He was the beloved father of John Nieboer Jr and Isabel Baker as well as grandfather of Jared and Danielle Baker. John obtained his degree in accounting at Cleveland State University. However, his true passion was helping and serving others. To that end he pursued further studies in seminary at Trinity College in Lake Forest, IL. John retained long time employment for Apex Logistics International in the Chicago area. Yet he found his calling to serve his Lord and Savior through his work with Sunshine Gospel Mission with whom he served disadvantaged people throughout Chicago including and especially those at Cabrini Green, a Chicago Housing Authority public housing project located in downtown Chicago where he was a volunteer and board member for more than 20 years. In 1992, John relocated to Rochester, New York to assist his siblings with the care of their mother. John continued his pursuit of community-based service with The Salvation Army and later The Catholic Family Center in the Rochester area where he worked helping to establish refugee families in their new homes in the United States. John touched many hundreds of individuals and families in both the Chicago and Rochester areas. One of his co-workers described him as "a special man, a humanitarian, a compassionate selfless soul". Another friend, a newcomer to this country expressed that "he has the kindest soul". He especially touched those who left their countries to come as refugees to the U.S. and had nobody here. "John was there for us. I remember as a young kid seeing and hearing how he tried his best to do whatever was needed for each one of those families, including mine". Beyond serving others John loved cooking especially for large groups and was intrigued by the search of his family's genealogy. He researched and created an extensive family tree document that he shared to all family members. John served his Lord and Savior by selfless serving others. The gratitude of the Burmese community and others that he assisted with establishing new lives in this country is an amazing tribute to the life led by "Mr. John". The words to summarize the memoir of the life of John E. Nieboer; "Compassionate, caring angel blended with selfless silent stubbornness for serving others." The family plans to have a "Celebration of Life" service at the Northgate Bible Chapel, 240 McGuire Road, Rochester, NY, Saturday August 24, 2019. The details for the celebration will be shared through the chapel and Facebook communications. To honor John's desire to serve others within the community the family requests donations in lieu of flowers be made in his name to Catholic Family Centers, 87 N. Clinton Ave, Rochester NY, 14604 https://www.cfcrochester.org/our-services/welcoming-refugees-and-immigrants/.

John Edward Nieboer, of Rochester New York, passed away on Thursday, July 4, 2019 at the age of 81. John was born in Grand Rapids, MI on April 18, 1938, which was his early childhood home. He was the eldest son of Joseph and Evelyn Nieboer's... View Obituary & Service Information

The family of John Edward Nieboer created this Life Tributes page to make it easy to share your memories.

Send flowers to the Nieboer family.