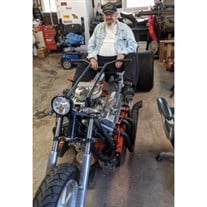 Jeffrey I. Griffith "Smooth" March 14th, 1944 Sunday March 7th, 2021 at age 76. Predeceased by his parents, Walter L. and Myrtie M. Griffith; his sons Dominic and James; and brothers in law, Paul Mooney and Jay Erke. Survived by his loving wife Louise; children, Sandy (Mark) Siekierski, Yvonne Milillo, and Jeffrey Griffith. Grandchildren; Nicole Sprague, Jimmy (Julie) Sprague, Dominic (Jamie) Sprague, Kevin (Kira) Perri, Shawn Shartran, Samantha Shartran Johanna Sprague, Michaela Milillo, Taylor Bourne, Hayley Griffith, and Riley Bourne. Great grandchildren; Anthony, Lily, Dominic, Jamison, Lily, Sammie, Amelia, Natalia, Madison, Adriana, Analiss, Dezzy, Jimmy, Mikey, Karmella, Karmine, Colton, Gianna, Dima, Lena, Annabelle and Cole. Sisters, Christine Mooney, Maggie (Steve) Lincoln, Laura (Eric) Charron and Barb Erke. He was an Army veteran, drafted during the Vietnam war, who loved many hobbies including racing, building motorcycles, and spending time with his family. He loved working on countless projects in his garage and sitting in the sun on sunny days. On July 20th, 1974 he married his beloved wife, Louise, and this year they would have celebrated 47 years. After working in the plastic molding industry for so long, he decided to open his own business called "Polar Plastic Inc.". With the success of the company he was able to fulfill his long time dream of racing with his crew, son, Jeffrey and lifelong best friend, Jan Stein. Because of this, he was able to race at his favorite track, Watkins Glen. He bought his first Harley Davidson in 1996, at the age of 52, and later turned it into a trike. Jeff loved riding with friends, being part of charity rides including the Patriot Guard, and going on vacations with his son, Jeffrey. His last project was building a V8 Trike with his helping friend and neighbor, Bill Wallace. Jeff was a loving (great)Grandfather who spent warm days taking is great-grandchildren on rides on his scooter and putting a smile on all the neighbors' faces. He always made sure his house and heart were open to anyone in need. There are so many great stories and memories that everyone has of Jeff that we ask you to go down below and write something so everyone can read and enjoy.

The family of Jeffrey Griffith "Smooth" created this Life Tributes page to make it easy to share your memories.

Send flowers to the "Smooth" family.