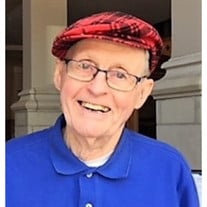 Hubert Wayne Van Ness October 6, 2019 - Hubert Wayne Van Ness, age 90, crossed over the finish line having run the good race and was finally released from the cruel grip of Alzheimer's disease. He is survived by his wife, of 38 years, Helen Marie Van Ness and his children - Karen (Paul) Irvine, Rick (Jenifer Howell) Van Ness, Tom (Linda) Van Ness and Julie (Ron January 2019) Kiene, plus 10 "above average" grandchildren and 7 "exceptional" great-grandchildren. He was reunited with his parents Hubert James and Sarah Jean Van Ness, his first wife, of 28 years, Eleanor Louise (Kazebee), his brother James Edward and sister-in-law Mary Ellen (Dowd) Van Ness. Wayne was born in Omaha, NE in 1929 and grew up in Boone, Iowa. He attended Iowa State University and became a civil engineer, working construction jobs and ending his career with 25 years at for IBM. He met and married Eleanor Louise Kazebee in Cleveland, OH in 1952 and had three lovely children: Karen, Rick, and Tom. Wayne volunteered as Scout Master for Troop 1 in Stamford CT for 20 years and enjoyed many adventures with the scouts and their fathers on monthly camping trips and senior outings spending time outdoors in the mountains and canoeing lakes and rivers. He enjoyed gardening and woodworking in his free time and over the years crafted beautiful wooden furniture for his family. Music was always a part of his life and he enjoyed a wide range of selections from Classical to Broadway. He was very active in his church through many leadership positions and worked in his community through SCORE and Habit for Humanity. Wayne loved to travel and lived in all four corners of the US during his life, moving from Iowa to California, then Oregon, followed by a time in Connecticut and Florida, with several places in between. Eleanor passed away and Wayne remarried Helen in 1982, adding another energetic daughter to his family, Julie. Wayne and Helen spent the majority of his retirement in South Carolina, enjoying life on Lake Hartwell, spending time with his family, and traveling abroad. Wayne had a positive personality and was loved and respected by everyone he met. Even as the disease of Alzheimer's slowly took away his abilities, he maintained his gentle, pleasant manners and now is finally at peace. There will be a memorial gathering in the chapel at the Episcopal Church Home, 505 Mt. Hope Avenue, at 2:00 pm on Saturday, October 26, 2019 The family would like to express their gratitude for the loving and compassionate care he received at Marian's House, Seabury Woods, Episcopal Church Home 4North and the excellent staff at each.

Hubert Wayne Van Ness October 6, 2019 - Hubert Wayne Van Ness, age 90, crossed over the finish line having run the good race and was finally released from the cruel grip of Alzheimer's disease. He is survived by his wife, of 38 years, Helen... View Obituary & Service Information

The family of Hubert Van Ness created this Life Tributes page to make it easy to share your memories.

Send flowers to the Ness family.