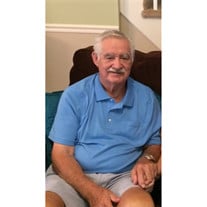 Harry James Lewis, age 81, passed away after a long battle with Parkinson's and Lewy Body Dementia on Monday June 25, 2018. He was born on April 28, 1937 in Blossburg, PA to Charles and Charlotte (Meise) Lewis. He was one of fifteen children and worked hard to help support the family. After he graduated from high school he went on to attend Roberts Wesleyan College. He started classes to pursue a career in ministry but changed his major to elementary education. While studying at Roberts he met Cathryn (Crouch) Lewis, his loving wife of 60 years. They were married on December 14, 1957. They had 5 children. Harry was a science teacher. He started his career in the Honeoye School district but spent the majority of his career in the Churchville Chili School District where he taught for 35 years. He enjoyed taking his students on field trips to Mt. Tone and Ashoken and making science come alive for them. He was an integral part of starting the Sprucewood Nature Center in Churchville, NY which has an outdoor classroom for students to enjoy. He also spent time as an adjunct professor at Roberts Wesleyan College later in his career. He spent his summers painting houses, playing softball, gardening and watching the New York Yankees play ball on TV. He enjoyed spending his free time with family in Long Island and many summer camping trips to Wells, NY. One of the things Harry held dear to his heart were his few trips to Hawaii. Harry was happiest when he was holding or spending time with one of his many grandchildren or great grandchildren. He is survived by his beloved wife Cathryn; children Tim (Brenda), Brian (Jamie), Rob (Marcia), Sue (Jody) Patchen and Kim (Larry) Weingartner; 15 grandchildren; 12 great grandchildren; siblings; Mary Lewis (Larry) Osgood, Pauline Lewis Crum, Lester (RoseAnn), Hazel (Thomas) Harriger and Cathy Lewis (Bob) Parker. Friends are invited to his memorial service Saturday july 21st 3pm at Grace Covenant Church 224 Chestnut Ridge Rd. Rochester 14624 Please make donations to the Lewy Body Dementia Association; www.lbda.org

Harry James Lewis, age 81, passed away after a long battle with Parkinson's and Lewy Body Dementia on Monday June 25, 2018. He was born on April 28, 1937 in Blossburg, PA to Charles and Charlotte (Meise) Lewis. He was one of fifteen children... View Obituary & Service Information

The family of Harry James Lewis created this Life Tributes page to make it easy to share your memories.

Harry James Lewis, age 81, passed away after a long battle with...

Send flowers to the Lewis family.