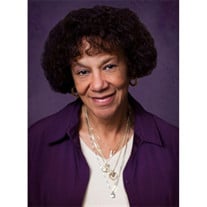 Grace Emma Williamson was born at home on November 9, 1935, in Peterboro, New York. Grace was the second of eleven children and the first daughter born to Harriet Ruth and Walter Berry Jennings, Sr. Her siblings affectionately called her "Sis." Grace grew up in Oneida, New York. She was a gifted student, graduating from Oneida High School at the age of 16. Grace was the first person in her family's history to attend college, graduating from the State University of New York Teachers College at Potsdam. Grace would later become the first person in her family's history to earn a master's degree, finishing up graduate study work she began at Colgate University at the State University of New York College at Brockport. Grace was always musically inclined. She learned to play the piano and clarinet as a child and was a member of her high school concert and marching bands. She also loved to sing and was a member of several choirs throughout her life. Grace was a gifted athlete. She was the captain of her high school softball team, and a member of her high school basketball and volleyball and college cheerleading teams. She was an avid bowler and an accomplished ice skater. Her talents also extended to art and drama. Grace dedicated 41 years of her life to the education and uplift of Black children. She spent the majority of her career working as a Chapter 1 / Title I Reading Teacher at George Mather Forbes School #4 in Rochester, New York. She also worked as an Administrator for the Rochester City School District. Grace invested her time and talent in support of several youth-oriented programs, including the Black Seeds Dance and Drama Group and Project STRIDE. Grace was recognized as Teacher of the Year in 1972, and an Outstanding Elementary Teacher of America in 1973. Grace raised her two children as a single parent and at times worked multiple jobs to provide for them and maintain the home that she lived in for 51 years. Grace was very socially active in the Rochester community. She was a 59-year member of the Memorial AME Zion Church, serving as a Church Mother and life member of the Women's Home and Overseas Missionary Society. She was also a Golden Soror of Alpha Kappa Alpha Sorority, Inc.; and a member Jack and Jill of America and Just Us Retirees. Grace enjoyed her retired years playing bingo, hitting the casinos, traveling the country and taking her dream trip to Europe. She also loved spending time with her family, especially her granddaughter. Grace transitioned at home on January 8, 2020 after a long battle with Alzheimer's disease. She is predeceased by her parents, Harriet Ruth and Walter Berry Jennings, Sr.; her brothers David Jennings, James Jennings, Paul Jennings, Sheldon Jennings and Thomas Jennings; her niece Michelle Grant; her nephew Christopher Jennings and her grandnephew Connor David Wall. She is survived by her loving daughter and caregiver for the last three and a half years of her life Loreen Dyanne; her sisters Diane (Roosevelt) Grant, Brenda Jennings, Sheila (Isaac) White and Eileen (David) Wright; her brother Walter Berry Jennings, Jr.; her granddaughter Briana Williamson and 56 nieces, grandnieces, nephews and grandnephews. Grace loved her family dearly and will be greatly missed. May she forever rest in paradise. Friends may call Friday, January 17th, 2020 from 4pm to 7pm at Memorial AME Zion Church, 549 Clarissa Street, Rochester, New York 14608. Alpha Kappa Alpha Sorority, Inc. Ivy Beyond The Wall Ceremony will be held during the wake. Grace's home going service will be held Saturday, January 18th, 2020 starting at 12 noon at Memorial AME Zion Church, with a public viewing preceding the service from 11 am - 12 noon. Interment will be at the Grove Place Cemetery. In lieu of flowers, donations can be sent in Grace's honor to the C. I. Bullock Scholarship Committee of the Memorial AME Zion Church.

Grace Emma Williamson was born at home on November 9, 1935, in Peterboro, New York. Grace was the second of eleven children and the first daughter born to Harriet Ruth and Walter Berry Jennings, Sr. Her siblings affectionately called her "Sis."... View Obituary & Service Information

The family of Grace Emma Williamson created this Life Tributes page to make it easy to share your memories.

Send flowers to the Williamson family.