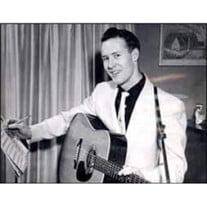 Gerald C. Englerth "Jerry" Chili - Wednesday, June 24, 2020 at age 84. Predeceased by his wife, Elaine. Survived by his children, Sharon Smith, Mark Englerth, Devin Englerth, and Pamela (Micheal) Mercendetti; grandchildren, Sharla, Millie, Alex, Anza, Jacob, Aaliyah, Aimee, Becky, Sara, Fernando, Vincent and Sameen; many great grandchildren, nieces, nephews and dear friends. Private service and interment. Donations may be made to Lollypop Farm. Jerry Englerth (aka Jerry Engler). Born March 31st, 1936, left this world on June 24th, 2020. He was a Father, a Son, an Uncle, a Great Friend, a Confident, a Mentor, an Advisor, and even a Second Father to many. As a talented young musician, songwriter, singer, and guitarist, he had his brush of fame in the budding years of Rock n Roll with a single that actually got some airplay in the late 50's. It was called Sputnik, a song Jerry wrote in 1957 when he was 21 and recorded with the 4 Ekkos; a song for which, even today, he is known and celebrated internationally as an icon of the Rockabilly Era of Rock n Roll! Jerry got to meet and share the stage with many talents of the 50's: Sam Cooke, Little Anthony & The Imperials, Fats Domino, Chuck Berry, and so many more. But, the name he spoke of most fondly was that of Buddy Holly, for not only did they play in the same venues, Buddy invited Jerry to his studio in Clovis, NM, to do some recording work together. So, on September 7, 1958, Buddy helped arrange, record, and even play tubular bells and lead guitar on another Engler song called "What A Gonna Do?" which had a limited release in 1992 with a remastered version of Sputnik. A family calling cut short his promising career in the music entertainment world, but he never regretted dedicating his life to being a family man. He would go on to achieve management level positions with both Kodak and Xerox until untimely health issues cut short his promising corporate career, as well. He forever remained a Songwriter and started collecting Guitars, then built a home Studio, where he put all that he had learned about Sound Mixing and Production to good use; producing several CD's on his own creation. He was the consummate Public Entertainer, a Philosopher, a Local Musician and Songwriter Advocate and Promoter, an Avid Reader, and an Audio and Video-phile. One of his crowning achievements was the formation of The Songwriter's Advocate (TSA) group, which Jerry founded. It served as a vehicle for regional songwriters and musicians to meet up and help each other hone their craft; encouraging them to continue their respective growth, record their music, and promote it to the public-at-large. Many local musicians benefited from that organization and each of them realized some success as a result of it. Many Rochesterians will remember "Morning Break" on WOKR TV with Don Alhart. Well, there was an open invitation competition to write a theme song for the show and Jerry had the winning theme! That theme song was heard by thousands every day for years! His presence, along with his booming voice, would fill any room he entered, and his loud laugh could shake the walls! He was Passionate and Outspoken in his Beliefs, Opinions, and on Topics he was vastly Knowledgeable in. He was not a shallow person, not one to be fake. The man he showed you was the man he was. Period. He leaves behind many who respected him, remember him fondly, and still love him dearly. He will be missed. Play on, Jerry, play on! W. Scott Pavone For those that want to learn more about Jerry, Google him: Jerry Engler. You will get a wealth of information and music.

The family of Gerald Englerth "Jerry" created this Life Tributes page to make it easy to share your memories.

Send flowers to the "Jerry" family.