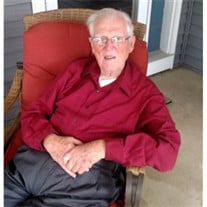 North Chili: Went home to be with the Lord on Saturday, May 30, 2020 at age 94. Predeceased by his loving wife, Virginia; granddaughter, Theodora Briamis; his parents Clarence and Myrtle (Miller) Atkinson and two siblings, Helen Murray and Ronnie Atkinson. Survived by his children, Barbara (Robert) Duckwall, Cheryl Atkinson, Nancy (Vassilios) Briamis, Carol (Dale) Stephenson and Leanne (Randy) Latona; grandchildren Angela & Peter Duckwall, Anna (Nate) Blasco, Daniel (Mandi) Stephenson, Jamie (Becky) Stephenson, Cody & Lexi Latona; great-grandchildren, Camdyn, Dylan, Rose and Aila; brother Marvin Atkinson; numerous nieces and nephews. Gerald was born September 29, 1925 in Burke, South Dakota and raised in Butte, Nebraska on the family homestead, where he milked cows and feed pigs before driving to school with his brother and sister in a Model T. After graduating from Butte High School, he attended Central College of the Free Methodist Church in McPherson, Kansas, in 1943. He left Central College when "Roosevelt invited him" to join the Navy at the onset of World War II. He was accepted in the Officers' Training School, where after boot camp he was sent to the University of Southern California. He graduated from the USC with a Degree in Electrical Engineering. Upon completion of his degree he served in the Navy as an officer on the USS Boxer. He met Virginia Croff while in California and they married on September 6, 1947 in Shelby, Michigan at the Shelby Wesleyan Methodist Church. Gerald started his engineering career in Milwaukee and in 1954 was hired by Lapp Insulator in Leroy, NY. He moved his wife and two young daughters to North Chili into the home that he lived in until his death. While at Lapp, he developed a new electrical bushing that allowed him to travel through Europe to apply for numerous patents. Gerry and Virginia opened their home to friends and strangers alike. It was not unusual for their three-bedroom home to be full of extra guests. They hosted numerous foreign exchange students for long and short terms stays, both adults and teenagers. Roberts Wesleyan College students stayed with them and were treated like family. Gerald had a servant's heart always looking for opportunities to serve others. He was an active member of Pearce Memorial Free Methodist Church, holding many positions over the years including Sunday school teacher and treasurer. He was pivotal in the 1965 church expansion project that built the 1,500 seat sanctuary. He became active in many aspects of the Free Methodist Church at the Genesee Conference and the World Headquarters that was in Winona Lake, Indiana. Gerald worked numerous years on the Churchville-Chili School Board, serving many terms as Board President and having the honor of handing high school diplomas to four of his five daughters. He served extensively during the construction of Churchville-Chill's current Junior High School and High School. In his retirement years he served at Lighthouse Christian Camp (LCC) Barker, NY. He served on their Board of Trustees for many years including Board President. During his legacy as LLC President he coordinated the upgrading of the campgrounds water system that buried the waterlines underground and afforded its residents a longer camping season. His lifelong project was working on his lakefront cottage at LCC. His home away from home, it became a refuge and place of peaceful rest. Gerald enjoyed woodworking and made homemade gifts for his family for Christmas every year. He worked on many custom items for his family and friends that will be precious heirlooms passed down to the next generation. Gerald or Gerry as his friends called him, was an avid reader, particularly biographies. He passionately read presidential biographies and US History but focused predominantly on Abraham Lincoln. He collected and read over 100 books on Lincoln and he found Lincoln's strong character in the face of grave difficulties, worthy of years of reading and reflection. Gerald will be best known as a faithful servant of his Savior, Jesus Christ. A celebration of Gerald's life will be announced at a later date. In lieu of flowers, memorials may be made to Lighthouse Christian Camp.

North Chili: Went home to be with the Lord on Saturday, May 30, 2020 at age 94. Predeceased by his loving wife, Virginia; granddaughter, Theodora Briamis; his parents Clarence and Myrtle (Miller) Atkinson and two siblings, Helen Murray and Ronnie... View Obituary & Service Information

The family of Gerald L. Atkinson created this Life Tributes page to make it easy to share your memories.

Send flowers to the Atkinson family.