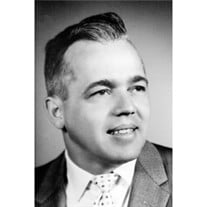 George E. Huntoon "Bud" Rochester - 1925 - 2021. Bud Huntoon died on January 1, 2021, after bravely fighting Covid-19 for two weeks. He was 95. Family and friends remember Bud for his smile and kind words. "You're beautiful," was a common greeting from Bud. Bud met the love of his life, Sue Huber, after World War II and married her in 1948. They were a great team and raised four children together, Ann (Edward) Huntoon Gessen of St Petersburg, FL, David (Beverly) Huntoon, Webster, NY, Patricia (Leonard) Schantz, Avon, NY and Suzanne Whelehan, St Petersburg, FL. He had 8 grandchildren, Geoffrey, Shanna, Brianne, Sarah, Daniel, Patrick, Chad, Alison, and 6 great-grandchildren, Tyler, Colin, Mason, Keegan, Jameson and Luciana. His family meant everything to him. Bud loved music and played the drums for most of his life. His love for the drums started when at the age of 14 he acquired a set of drums to help with his recovery from polio. When he was17, he joined the Navy during World War II. He was shipped to Northern Africa where one of his duties was as the drummer for a Navy band that entertained the troops 7 days a week. Once he came home, he joined the Danny Mance Band and played with them for many years. Bud set the drums aside to raise a family, but after he retired from the post office he started playing again with the Eastman School of Music New Horizon Band. He was a member for 25 years and was once featured in a video on the band. Bud loved to play and his drums were set up in his home allowing him to entertain himself. When he moved to the Rochester Presbyterian Home, Bud had drumsticks and a practice pad always at hand in the basket of his walker. We will so miss this good, kind and cheery man. Donations can be made to the Rochester Presbyterian Home.

George E. Huntoon "Bud" Rochester - 1925 - 2021. Bud Huntoon died on January 1, 2021, after bravely fighting Covid-19 for two weeks. He was 95. Family and friends remember Bud for his smile and kind words. "You're beautiful," was a common... View Obituary & Service Information

The family of George Huntoon "Bud" created this Life Tributes page to make it easy to share your memories.

Send flowers to the "Bud" family.