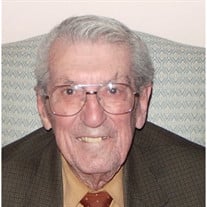 George Joseph Bartnett died peacefully in Mendon, NY at the age of 93 on March 12,2020. George, predeceased by his wife, Elizabeth (Betty) J. Bartnett (Dickens), father, Michael F. Bartnett II, mother, Anna Marie Bartnett (Murmann), brother, Michael F. Bartnett III and Anna Marie (Nancy) Mullins (Bartnett). Survived by children, Sharon E. (Tom) Sutton from Honeoye Falls, NY, Shawn G. (Judy) Bartnett from Honeoye Falls, NY, Patricia R (Barry) Condon from Albuquerque, NM and Kathleen J.(William) Shaw from Canandaigua, NY, 13 grandchildren, 15 great grandchildren and 18 nieces and nephews. George was born on June 1, 1926 in New Rochelle, NY. He married his love of his life Elizabeth (Betty) Bartnett (Dickens) and they were married for 58 years until Betty's passing in 2010. He retired as a small business owner of Bart Quality Moving in Chili, NY at the age of 66. George was a World War II veteran. He served in the US Navy from June of 1944 to June of 1946 with an honorable discharge. His Rating were AS, S2c, SLc, and SN3c. He served on the Underwater Demolition Team (which is now part of the Navy Seals) on the "USS Marlboro" and the "USS Wisconsin". The "USS Wisconsin" is now currently functioning as a museum ship in Norfolk, VA. He was an individual who loved deer hunting and never missed an opening day until this past year. He loved the water, enjoyed fishing off the coast of Shelter Island, NY. He was an active and dedicated member of St. Helen's Roman Catholic Church in Chili, NY and served as an usher for many years. He was appointed to the town of Chili, NY as a Deputy Supervisor and served on the Traffic and Safety Committee after he retired. He served for over 20 years. Private service and interment at the convenience of the family. In lieu of flowers, memorials may be made to the Benincasa House.

The family of George Joseph Bartnett created this Life Tributes page to make it easy to share your memories.

Send flowers to the Bartnett family.