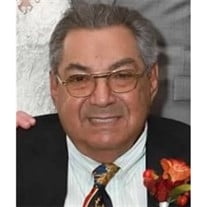 Enrique Sosa Biography Enrique Sosa was born in Havana, Cuba on September 14, 1936, to Modesto Sosa and Olga Garcia Sosa. He was doted upon by his parents, and extended family members. He married his childhood sweetheart, Zenaida, and had three children, Daniel, Caridad, and Pedro. Enrique was an avid, river swimmer, baseball player, and collector of Chevys, Lincolns and Buicks. Along with his father he worked for the American Pepsi Cola Company and his grandfather worked for the Coca-Cola Company. During the Cold War Era, Fidel Castro's communist and oppressive regime came to power and removed every Cuban citizen's human rights, mandated all boys and men between the ages of 12-25yrs. to register with the Cuban military, or face persecution by torture or death; and nationalized all American owned businesses and companies. Enrique decided in 1963, it was time to seek freedom for the future of his family. He defected to America, by boat, until rescued by the U.S. Coast Guard. Once he arrived in America, he encountered the world of segregation, the Jim Crow and Civil Rights Era. He faced language barriers, discrimination, unemployment, and PTSD due to the experience he suffered at on the rough sea. He eventually found day labor work throughout the states of Florida, California, Nevada, Oregon; the common wealth of Puerto Rico, and settling down in Rochester, NY where he reunited with his wife and children who went through their own harrowing journey of the 1966 Cuban Freedom Flights. In closing, Enrique especially loved spending time with his grandsons, cooking Cuban food, sharing his love for race horses and visiting the family dogs. No one could have wished for a better grandfather.

Enrique Sosa Biography Enrique Sosa was born in Havana, Cuba on September 14, 1936, to Modesto Sosa and Olga Garcia Sosa. He was doted upon by his parents, and extended family members. He married his childhood sweetheart, Zenaida, and had... View Obituary & Service Information

The family of Enrique Sosa created this Life Tributes page to make it easy to share your memories.

Send flowers to the Sosa family.