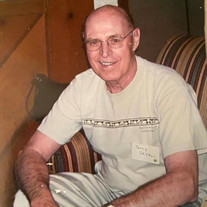 E. Terrance Stifter, a retired teacher and life-long resident of Rochester, New York, died on May 31, 2022, at the age of 89 from complications of heart disease. Terry or “Pa”, as he was nicknamed by his beloved grandchildren, was born on July 20, 1932, to Elmer and Louise Stifter. He received a bachelor’s degree and master’s degree in education from The State University of New York at Brockport. He served in the Army at Fort Bliss, Texas and was honorably discharged. Terry spent his entire teaching career with the Rochester City School District. Terry was a devoted husband, father, grandfather and great grandfather. He was a gifted teacher and story teller. He enjoyed the simple things in life – time with his family, fishing on Conesus Lake and morning coffee with the “counter creatures” at the Chili Family Restaurant. Terry was a great listener and good friend. His kindness, laugh and sense of humor will be missed by his family, friends, former colleagues and students. Terry is survived by his wife Joan, who has been his partner in life since middle school, his children Karen Snow (Jeffrey), Paula Collins (Patrick) and John Stifter (Christine). His son Terrance predeceased him two months prior. Terry is survived by his daughter-in-law Andrea Koller. He is also survived by his beloved grandchildren Christopher and Catherine Collins, Charles and Sarah (“Talley”) Snow, Alexander, Erika and Ben Stifter, Meredith and Damian Stifter and great grandson Carter Jeffrey Snow. Private interment at Holy Sepulchre Cemetery in Rochester, NY. Donations can be made in memory of Terry to the American Heart Association or to a charity of your choice.

E. Terrance Stifter, a retired teacher and life-long resident of Rochester, New York, died on May 31, 2022, at the age of 89 from complications of heart disease. Terry or &#8220;Pa&#8221;, as he was nicknamed by his beloved grandchildren, was... View Obituary & Service Information

The family of E. Terrance Stifter created this Life Tributes page to make it easy to share your memories.

Send flowers to the Stifter family.