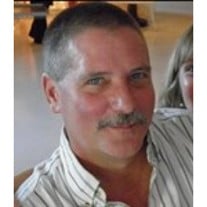 Captain Jeffrey A. Stokoe Scottsville - Captain Jeffrey A. Stokoe, 62, a decorated Veteran of the United States Air Force 174th Tactical Fighter Wing and 138th Tactical Fighter Squadron died peacefully surrounded by his loving family at Strong Memorial Hospital on September 20, 2019. Jeffrey was born on June 3, 1957 in Batavia, NY to Richard and Judith Stokoe (Crocker). He graduated from Wheatland-Chili High School in 1975. He attended Cornell University on an ROTC Scholarship and graduated in 1979 with a degree in Aerospace Engineering. After graduating from Cornell, he was stationed at Reese Air Force Base, Texas. In 1981, he flew A-10 Thunderbolt's throughout Europe with the 91st Tactical Fighter Squadron, RAF Woodbridge, United Kingdom. After returning to the states, Jeff was based at Davis-Monthon Air Force Base, Arizona as an Instructor Pilot for both U.S and foreign students transitioning to the A-37 Dragonfly and to the Forward Air Control mission with the 23rd Tactical Air Support Squadron. In 1987, Jeff returned to the Finger Lakes Region where he called Syracuse home, flying A-10's and F-16's as an Operational Fighter Pilot and Chief of Intelligence for the New York State Air National Guard at Hancock. Captain Stokoe logged thousands of hours of aircraft flight time in F-16, A-10, A-37, T-38 and T-37 aircrafts. He held commercial ratings as a Commercial Instrument Pilot (MEL), Flight Engineer, FAA First Class Medical and FCC Radiotelephone Operator. Captain Stokoe had Top Secret Security Clearance, flew classified missions and received multiple Top Gun awards throughout his career. In 1991, Jeff returned to his hometown of Scottsville, NY and worked on the Stokoe Family Farm. After he retired Jeff spent time volunteering for the Scottsville Free Library, LifeSpan, Meals on Wheels, Friends in Service Help (FISH), National Warplane Museum, Jewish Family Service of Rochester, Inc. and for the VA. Jeff was a natural comedian and always enjoyed making people laugh. He was an enthusiastic Bills fan and loved living life to its fullest. He truly was the life of the party and wanted to make the most of every moment. He will be greatly missed. Jeff is survived by his loving wife, Sharon R. Stokoe (Smith) who shared more than three decades of life together; his father Richard C. Stokoe (Kathleen Lacy) of Scottsville, NY; his sister, Jeanne (Stokoe) and Robert Leonard of Churchville, NY; his brother Gregory Stokoe (Julie Driscoll) of Scottsville, NY; his companion and dog friend, Bandit, many cousins, aunts, uncles, nieces and nephews. Jeffrey is preceded in death by his mother, Judith Stokoe (Crocker) and his loving dog, Maverick and cat Goose. The family would like to invite friends to a Celebration of Life in honor of Jeffrey A. Stokoe on Sunday, September 29, 2019 from 1-4pm at the Jarris Wadsworth Estate, 1211 West River Road, Caledonia, NY 14423 Jeffrey will be interred at a private ceremony at Quaker Cemetery. In lieu of flowers please consider a donation in the name of Jeffrey Stokoe to the Scottsville Free Library or the Scottsville Fire Department.

The family of Cpt. A. Stokoe created this Life Tributes page to make it easy to share your memories.

Send flowers to the Stokoe family.