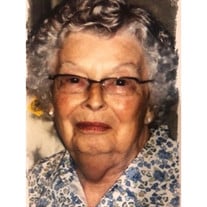 Catherine Mary Stanton (Doyle) Rochester, NY - Catherine Mary Stanton (Kay), born April 25th, 1925, at St. Mary's Hospital in Rochester, NY, passed into eternal rest on January 14th, 2020 at the age of 94. Kay, as friends and family called her, had a blessed and full life. Daughter of the late James and Julia (Foley) Doyle, she was a graduate of Sts. Peter and Paul Elementary School, and Madison High School. After her graduation from Madison, she worked at Eastman Kodak Company as a secretary, where she was employed until her marriage to her beloved Ernest. After raising their 4 daughters, she returned to Kodak where she worked as an administrative assistant until she retired. She was a devout parishioner at St. Helen's Church for over 50 years, and was very active in the Altar Society - laundering altar linens, cleaning the church and delivering communion to the sick. She and Ernie also volunteered at parish bingo and country fairs for many years. Most recently, Kay was a resident of St. Ann's Community, where she lived first at Chapel Oaks and later at Cherry Ridge Glen and Rainier Grove. Catherine was pre-deceased by her husband, Ernest; brother, Reverend James Doyle; sister, Esther Connors; brothers in-law Joseph (Smoke/Hyacinth) Stanton and John (Jack/Ruth) Stanton; and son-in-law, Stephen Siekierski. She is survived by her four daughters, Kathleen (Timothy) Whalen, Mary Anne Stanton, Eileen Siekierski, and Patricia (Joseph) Minisce; grandchildren, Jesse (Erin) Margolius, Julia (Cesar) Ahumada, Siobhan (Thomas Lowell) Whalen, Priya Stanton, Joseph (Christina) Minisce, Eric (Gina) Minisce, Laura Minisce and Zachary (Beth Morgan) Minisce; eight great-grandchildren, brother in-law Edward Connors, as well as many nephews, nieces, great-nephews and great-nieces. Calling hours will be held on Monday, January 20, from 4pm- 7pm at Leo M. Bean and Sons Funeral Home, 2771 Chili Avenue, Rochester NY. A Mass to honor Kay's life will be celebrated at St. Ann's Chapel, 1500 Portland Ave. at 11:00am, Tuesday, January 21. In lieu of flowers, donations can be made to the Leo Center for Caring at St. Ann's Community, or a charity of choice.

The family of Catherine Stanton (Doyle) created this Life Tributes page to make it easy to share your memories.

Send flowers to the (Doyle) family.