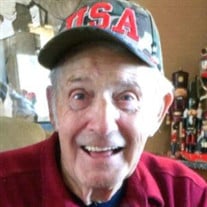 Bernard G. Lusk Rush - Saturday, February 12, 2022 at age 88. Predeceased by his parents, George and Velda; son, Donald; brother, David; and sons-in-law, Gary Wright and Gregrey Madison. Survived by his loving wife of 22 years, Karen; children, Heidi Wright, Sandra (John) Testa, David Adams and William Adams; grandchildren, Sarah, Emily, Jacob, Leah and Andrea; great-grandchildren, Marlee, Addisyn, Claire, Kate and Walter; cousin, Michael (Barbara) Lusk; nephew, David Lusk Jr.; and brother-in-law, Michael Kozsdiy. Bernie was a retiree of GM and was founder and co-owner of George K. Lusk and Son Auctioneering. He was President of Empire Arms for over 50 years and was a life member of the NRA, active in the Rocky Mt. Elk Foundation, Pheasants Forever, Ducks Unlimited and the National Turkey Federation. He was listed in the Boone and Crockett record book for shooting a world class moose. He was also a master garage sale and flea market picker and wheeler and dealer. Bernie was involved in many organizations, but his greatest accomplishment was his love of family. Family and friends may call at the Leo M. Bean and Sons Funeral Home Friday 4-7pm. Private service and interment at Grove Place Cemetery. In lieu of flowers, donations may be made to any of the organizations listed above or a charity of one's choice.

The family of Bernard G. Lusk created this Life Tributes page to make it easy to share your memories.

Send flowers to the Lusk family.