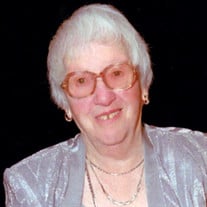 Arlene Winton Titus Chili - On August 13, 2021, Arlene Titus passed away peacefully at the age of 104 in her room at the Episcopal Church Home of Rochester, NY. Arlene was born on September 17, 1916, to Ralph and Nellie Winton, in Warners, NY. She grew up in Springfield Center, NY, the youngest of four children. In 1935, Arlene married Vernon R. Titus and they moved to the Catskill Mountain region of NY. In 1948 they moved to Rochester, NY where they raised their two children, James and Sally. Arlene spent the majority of her life in the town of Chili, until moving to the Villages at Unity Retirement Community in Greece, where she made many wonderful new friends and memories. During WWII, Arlene volunteered as a Nurses Aid at the local hospital in Callicoon, NY. When Vern and Arlene first moved to Rochester, they were both employed by RIT. In 1955, Arlene began working at the University of Rochester Medical Center, in the Department of Psychiatry. She worked a few different positions over her 30 years there, but for most her tenure she served as Supervisor of the Records Room where she was well liked by employees and doctors alike. Arlene was an active member of St. Luke & St. Simon Cyrene Episcopal Church for almost 70 years. She served two terms as Warden, one of which oversaw the merger of the two churches in 1988. Arlene also served as Treasurer and organized the Altar Guild for many years. She served three terms as a member of the vestry. Arlene loved the church and even though she couldn’t get to service as often as she would have liked in the past ten years, she continued to support the church and remained an active member. She lived at The Villages at Unity for ten years, where she was an active member of the community and made many friends. Arlene served as the Resident’s Counsel President twice, organized twice-weekly bridge games, called Bingo weekly, and became a Wii bowling champion. Arlene enjoyed gardening, crossword puzzles, sports (Go Yankees!), playing bridge, throwing parties, and taking in strays, people and animals alike. She was known for her quick wit, sharp sense of humor, and her charitable heart. Arlene is predeceased by her husband of 61 years, Vernon R. Titus, her daughter, Sally Titus Schove, and her granddaughter, Jodi Rae Lee. She is survived by her son, James R. Titus (Gail) of Bluffton, SC, four grandchildren, Jason R. Titus (Amy) of Brockport, NY and Kristen Serinis, Megan Lewin (Greg), and Jamie Schove Stevens (Kyle) all of Rochester. She is “Great Magic Grandma” to DJ and Arlen Guptill Titus, Nick Serinis, and Jack Dillman. She is also survived by three nephews, one niece, and many great nieces and nephews. Arlene’s loving and generous spirit allowed her to take on many honorary grandchildren, and she took pride in being called “Grandma” by many neighbors and friends throughout the years. Friends may call at the Leo M. Bean & Sons Funeral Home between 4 and 7 pm on Friday, August 27, 2021. A funeral service will be held on Saturday, August 28, 2021 at St. Luke & St. Simon Cyrene Episcopal Church (Two Saints) at 17 S. Fitzhugh Street, Rochester, NY, at 10 am, followed by a graveside service at Grove Place Cemetery. In lieu of flowers, please consider a donation in Arlene’s memory to the Two Saints Church, Open Door Mission or Lollypop Farm.

Arlene Winton Titus Chili - On August 13, 2021, Arlene Titus passed away peacefully at the age of 104 in her room at the Episcopal Church Home of Rochester, NY. Arlene was born on September 17, 1916, to Ralph and Nellie Winton, in Warners,... View Obituary & Service Information

The family of Arlene W. Titus created this Life Tributes page to make it easy to share your memories.

Send flowers to the Titus family.