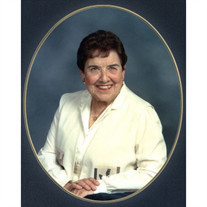 Anne E. Gunn Chili - Thursday, April 22, 2021 at age 96. Predeceased by her husband, John E. Sr.; son, Kevin; son-in-law, Dan Newkirk; and 4 siblings. Survived by her children, Donna Gunn-Newkirk and John E. Jr. (Barb) Gunn; grandchildren, Drew #1 (Ashley), Jacob #2, Rachel #3 and Danielle #4; sister, Gloria Spagnoli; and several nieces and nephews. Anne was born in New Jersey in 1924 to parents, Tully and Louisa Spagnoli and grew up in Woodhaven, Queens, NY. She graduated from Lane High School. Singing and theater were her passions. She saved all of her overtime money to take voice lessons at the Metropolitan Opera and to participate at Summer Stock workshops. She auditioned for Broadway and performed in a few off Broadway productions in Greenwich Village, NY. She also performed with the USO. She taught drama at the Industrial School for the Blind in NY, where her directorial career started. At the Indusrial Home she directed and performed in the production of "A Solid Gold Cadillac" and they were written up in the NY Times for being the first amateur group to perform this production. Her brushes with fame included an elevator ride with Carol Channing, meeting Helen Keller and seeing Judy Garland perform. In 1955 she met John Gunn at a YMCA dance in Brooklyn and they were married on August 26, 1956. They had 3 children, Kevin, Donna and John "JR". As a mother she always put her family first. This included taking care of her 8 year old son, Kevin, who was sick the last five years of his life. She was an active member of Holy Ghost Church and a member of the choir, a Eucharistic Minister giving communion to the sick and started a drama group called the Plucky Players. For over 40 years she directed the Plucky Players for performaces all over Rochester. The Holy Ghost women became her best buddies and partners in crime and also became surrogate mothers for each other's children. For 36 years she worked for the Town of Gates where she founded and directed the Gates Showcase, working with seniors. They performed at local elementary schools and won 3 awards, a local, a state and a national award. She was also Past President of the Gates Community Theater. Anne was a member of the Oasis Tappers, tap dancing until the age of 92. You can see her performances on Youtube, including the one as Mother Superior leading the order of the sisters before they came out for their tap routine. Anne loved spending time with her 3 sisters, Adele, Lucy and Gloria and 2 brothers, Mario and Sonny. The girls often referred to themselves as the La-La sisters. In later years, she and her siblings were able to spend many winters together in Tarpon Springs, FL. She was a sweet soul who gave so much of herself to others. She will be truly missed. Friends may call at the Leo M. Bean and Sons Funeral Home Tuesday 4-7PM. Funeral Mass Wednesday 10AM at St. Pius Tenth Church, 3000 Chili Ave. Rochester, NY 14624. Reception following the mass at Church Lodge at Churchville Park. Interment, Holy Ghost Cemetery. In lieu of flowers, memorials may be made to Camp Good Days and Special Times.

The family of Anne E. Gunn created this Life Tributes page to make it easy to share your memories.

Send flowers to the Gunn family.